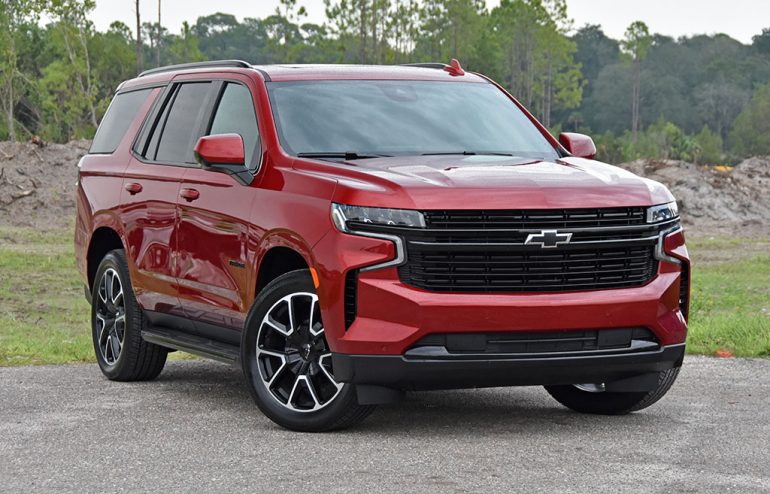 The Chevrolet Tahoe, alongside its GMC Yukon and Cadillac Escalade platform mates, have been consistent forces in shaping the large body-on-frame SUV segment for decades. Such vehicles received a redesign for the 2021 model year. At the less expensive end of the spectrum residing with the new Chevrolet Tahoe, there’s a welcoming and improved formula that can be had with the powerful 6.2-liter engine in the sporty Tahoe RST trim that I get to check out this week.

The new 2023 Chevrolet Tahoe RST embodies the sportiest variation of the big Chevy SUV with unique 22-inch wheels, front darkened grille, black exterior trim, special RST seats, and distinctive accent stitching throughout the interior. The Tahoe RST trim opens a wide gamut of options but remains to be a sweet spot for its mid-level trim position to keep a respectable price but offer the more powerful powertrain as an option. 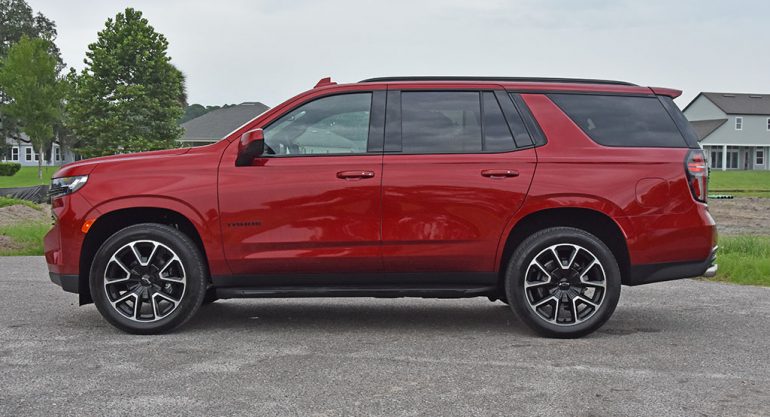 The new Tahoe has a look that sets it apart from the rest of the Tahoe lineup further making it an attractive offering apart from trim levels that “look” somewhat different like the off-road-capable Z71 trim. However, the Tahoe RST keeps things rather simple, which potentially helps with its sporty character in the way it looks and drives.

Being the sporty variation of the new Tahoe, the RST trim feels a bit lighter on its feet than the upper-level trims or the other Tahoe stablemates from GMC and Cadillac. Some of that feeling is just that, the Tahoe RST is slightly lighter by doing away with a long list of added equipment found on the more expensive variations, such as not having the trick air suspension setup but still offering the wonderful magnetic ride control system found on my test vehicle. The magnetic ride control comes as part of the Sport Performance Package on the Tahoe RST, which adds the 6.2-liter V8 engine that’s good for 420 horsepower and 460 lb-ft of torque sent through a 10-speed automatic transmission and a catback performance exhaust system. 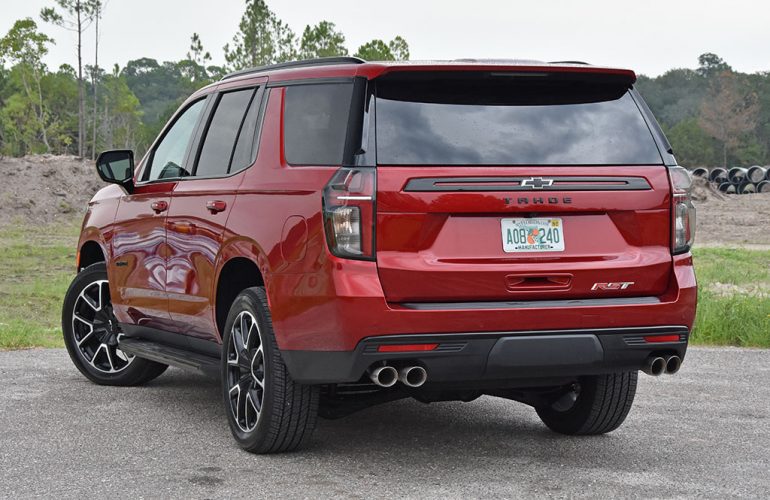 The engine and transmission combination, which are nearly perfected at this point for all the GM-brand large SUVs, work in harmony for welcomed compliance and an assured power output all through the RPM range. The Tahoe RST never feels like it needs additional power and the delightful rumble from the big V8 out the quad-tipped performance exhaust system that comes with the Sport Performance Package sounds just right. There’s nothing overly done about the Tahoe RST. It’s probably the nimblest SUV out of the pack of General Motors large SUVs, if you can call a vehicle of this mass such a thing. Still, the Tahoe RST with the magnetic dampers feels like the more agile sibling, which may only be outdone by its distant cousin, the supercharged Cadillac Escalade V that packs 682 horsepower.

Out on the road, the Tahoe RST feels smooth and there’s not near as much body jiggle as found in the previous generation of the Tahoe. There’s also a nice feel to the big SUV when you put it into turns as there’s not as much body lean as you would expect for its size. While the windows in the RST are not laminated and you don’t have the luxury theme of other more-expensive stablemates, the Tahoe RST remains surprisingly quiet when cruising lacking unwanted drone and only extenuated by a tasteful exhaust rumble when you put your foot down. 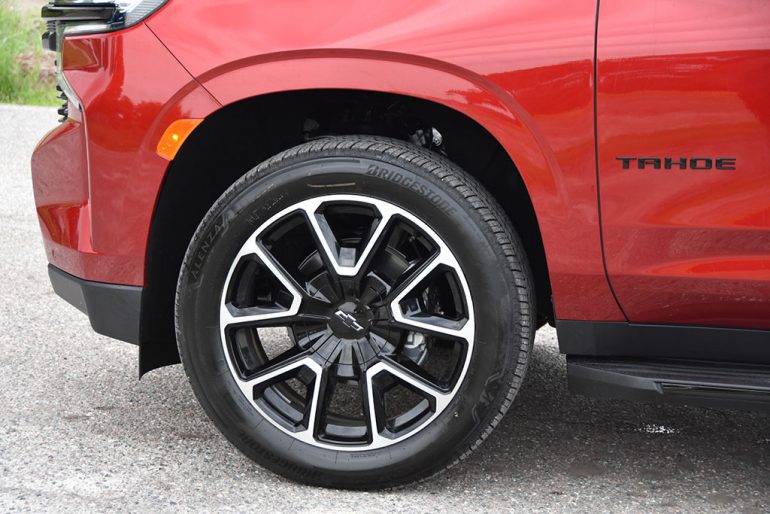 Zero to 60 mph takes just 5.7 seconds, which is the quickest GM large SUV I’ve tested. I’m sure the Caddy Escalade V will shatter that figure but we’re talking about an ‘affordable’ large body-on-frame SUV here. Having the four-wheel-drive setup, which features a mechanical limited-slip differential and single-speed transfer case with an automatic all-wheel-drive setting, gives the Tahoe RST some off-roading chops but lacks the proper tires and ground clearance to really get down and dirty like it’s Z71 trim sibling can. Otherwise, the Tahoe RST is the proper highway cruiser with a bit of unique style, a dash of luxury, and a respected overall performance for its class. Fundamentally, opting for the RST trim is the right choice if you want to get that sweet 6.2-liter V8 over the standard 5.3-liter V8 with just 355 horsepower that’s paired with an older six-speed automatic transmission and don’t mind omitting the luxury-esq features of the more-expensive High-Country trim. 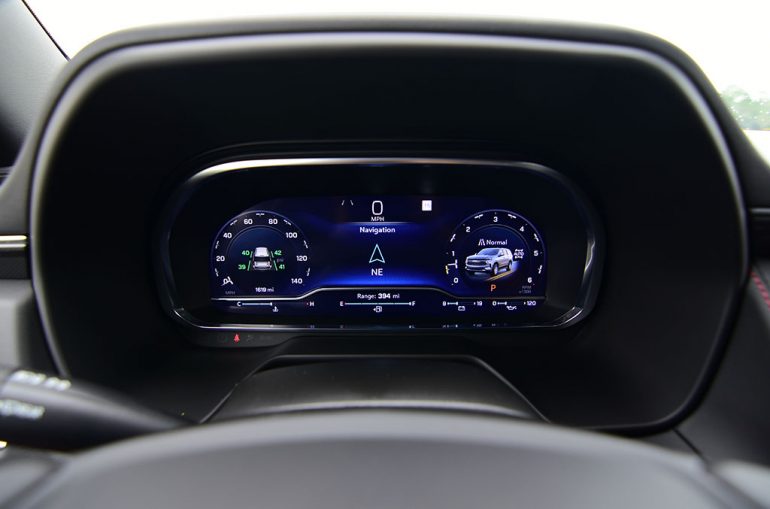 The Chevrolet Tahoe RST with the 6.2-liter V8 and all-wheel-drive doesn’t have the EPA estimated MPG figures of other trims that may get up to 22 mpg on the highway. However, the EPA estimates of my test vehicle at 14 mpg city, 18 mpg highway, and 16 mpg combined are easily met and often bested. At times, I was able to get just over 19 mpg on the highway where I felt the subtle transitions of the engine switching over to its 4-cylinder mode using the clever cylinder deactivation system. The large fuel tank at 24 gallons gives you plenty of range for your travels. 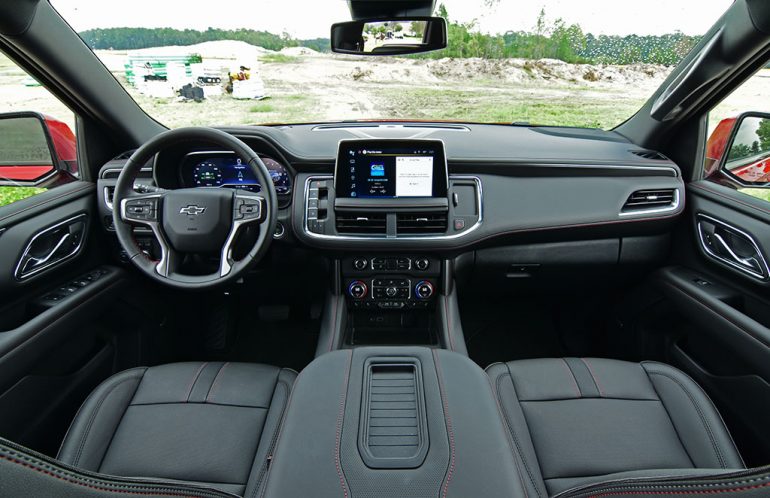 From the recent redesign for the 2021 model year, the Chevrolet Tahoe has a more inviting cabin with easy access to any row of seats. There’s somewhat of a downplay on content for the Tahoe RST trim, which helps to keep the cost down. However, there are still the expected creature comforts of front heated seats, 3-zone automatic climate control, a wide range of adjustability in the front power-adjusted seats, the availability of a rear seat media system optioned on my test vehicle with dual 12.6-inch touchscreens mounted behind the front seats, and the integration of wireless Apple CarPlay and Android Auto fed through the latest 10.2-inch touchscreen infotainment unit. There’s a wireless charging pad that gets the customary under-pad cooling you expect in new GM vehicles to help keep your smartphone from overheating during charging. 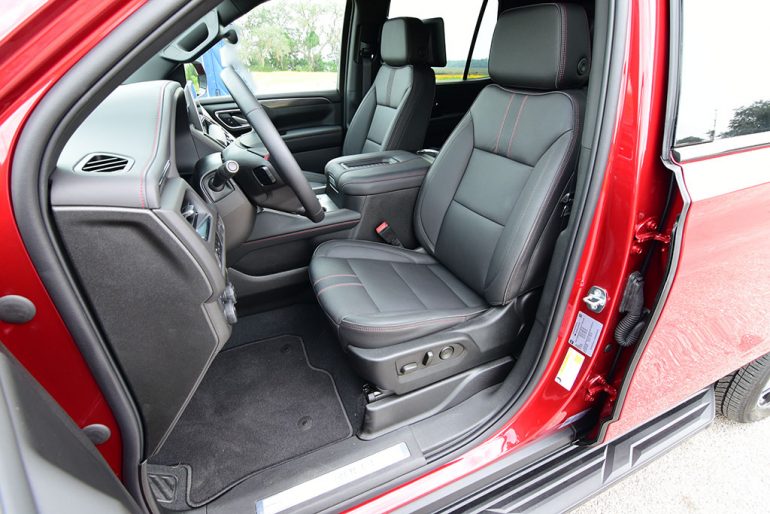 The new infotainment system utilizes enhanced Google-based voice functions and has a short learning curve with a basic operation and user-friendly menu sets. The only downfall of the system is that it takes a second or two to respond to some inputs to access core functions. 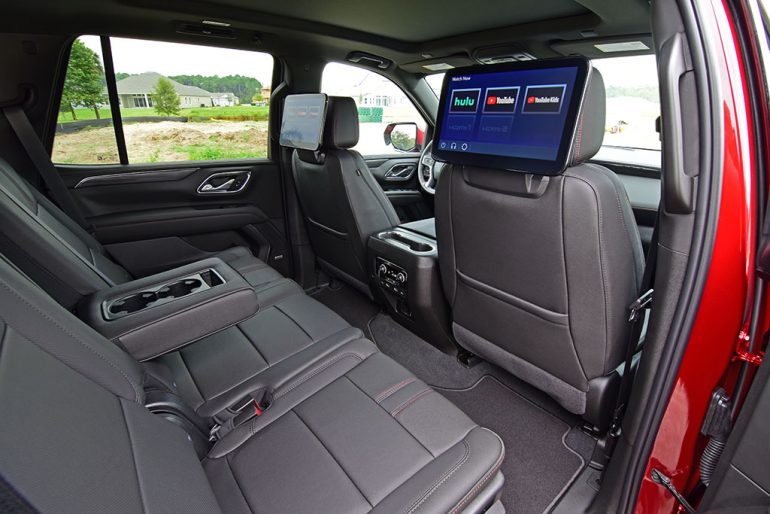 Seating areas cleverly use the space in the new Tahoe and are accommodating for passengers of just about any size, even in the third row. There’s seating for 8 in my test vehicle and the second row offers added flexibility by allowing the 60/40-split bench to slide forward and back. The cargo room is plentiful with 25 cubic feet behind the third row or just over 122 cubic feet with the second and third rows folded and accessed by a power liftgate. 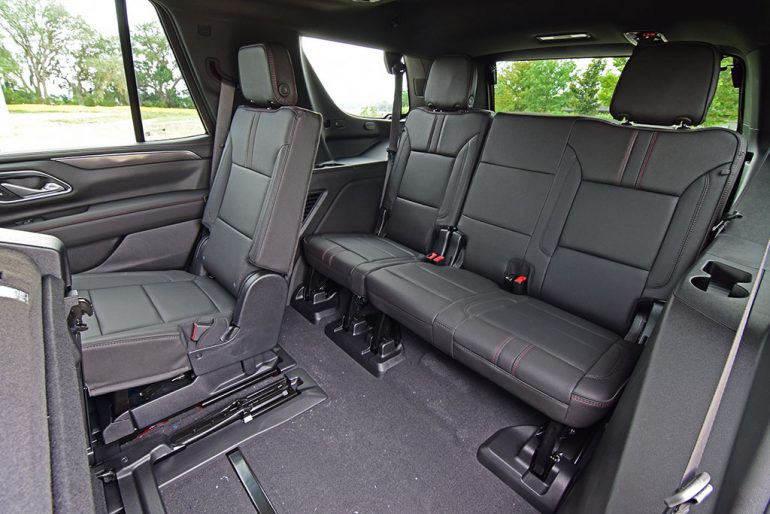 The Chevrolet Tahoe RST, again, keeps things simple and in the area of safety, some may find that it is missing some of the desirable active safety features, such as blind-spot monitors or adaptive cruise control, which are available features for an additional cost. What does come standard is the forward collision alert, lane departure warning/mitigation, front pedestrian detection/braking, front and rear park assist, and a driver alert system. A 360-degree camera system is unfortunately not available on the Tahoe. 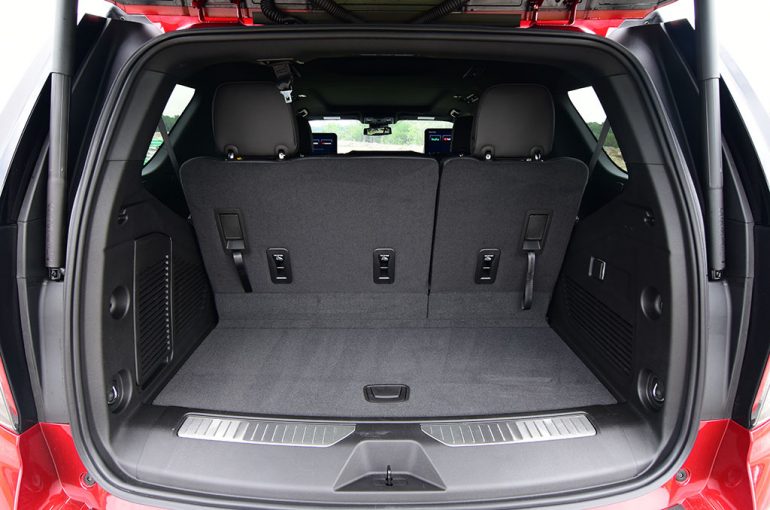 The Chevrolet Tahoe remains to be a good value for the lower and entry-level trims if you’re looking to get into a large body-on-frame SUV. Moving up to the RST trim is a nice place to reside for those who want a bit of extra performance in opting for the optional 6.2-liter V8 where you’ll look to spend $73,605 for my test vehicle that includes the options of the Sport Performance Package ($3,820), rear seat media system ($1,995), power panoramic sunroof with power sunshade ($1,500), and the Radiant Red Tintcoat exterior paint ($495). The new Tahoe RST without options and the standard 5.3-liter V8 engine starts at $64,000 while a base Tahoe LS starts at $57,595 before any fees or options.