A vehicle’s engine is composed of parts too numerous to count, each of which plays a pivotal role in ensuring streamlined and efficient operation. On top of that, many of these individual components work in relation to one another, to perform a specific function. If any one of these components fails, the full functionality is impeded.

One particular component that plays a key role in a larger system is an engine’s thermostat. The thermostat proves critical to the overall regulation of engine temperature, along with a vehicle’s radiator and cooling fans.

Unfortunately, engine thermostats can, and do fail from time to time, leaving motorists bewildered as to the source of the numerous issues that often follow. In a number of cases, a failed thermostat can even leave one stranded with little recourse, outside of calling for a tow.

Read on to learn more about an engine’s thermostat, as well as the numerous symptoms which often accompany its failure.

What Does a Thermostat Do In a Car? 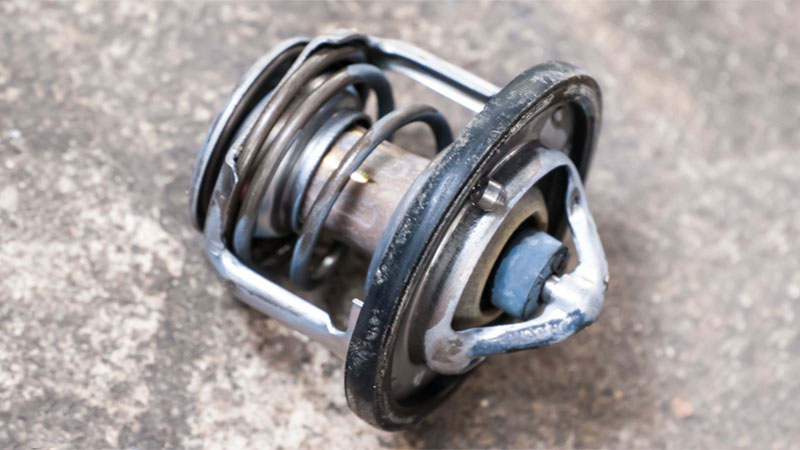 As you might have already guessed, a vehicle’s thermostat regulates the temperature of all coolants within an engine. This is accomplished by regulating the flow of coolant between an engine and its accompanying radiator.

The thermostat itself acts as a valve, designed to open and shut in relation to temperature. Thermostats are engineered to open at a specific temperature, deemed optimal by a vehicle’s manufacturer. This temperature varies from one model of vehicle to the next.

When the thermostat is closed, coolant circulates only within the engine itself, and all related fixtures, bypassing the radiator altogether. This allows an engine to reach the ideal operating temperature much more quickly than would otherwise be possible.

Upon reaching its designated opening temperature, a thermostat springs open, allowing coolant to pass through a vehicle’s radiator, where excess heat is dissipated. This effectively regulates an engine’s internal temperature, thereby preventing overheating.

Where Is It Located?

A vehicle’s thermostat is generally located near an engine’s water pump, at a junction with the cylinder head(s). The exact location of an engine’s thermostat can be easily discerned by tracing the upper radiator hose to its mount with the engine itself.

Some older vehicles actually housed the thermostat within the upper radiator hose itself. However, this practice has now largely gone by the wayside. Most engines now feature a dedicated thermostat housing, in which the thermostat itself is housed.

A faulty thermostat is often accompanied by many different symptoms, some of which tend to be far more severe in nature than others. Recognizing these symptoms can prove beneficial when attempting to remedy the issue at hand.

The following are several of the most common symptoms associated with thermostat failure.

A thermostat that has failed in the open position can often be recognized by a general lack of cabin heat. This occurs when an engine’s coolant fails to provide ample heater core temperatures.

A sudden loss of coolant often comes as the result of a thermostat that is stuck closed. This scenario leads to a lack of coolant flow, causing coolant to boil over from a radiator’s cap.

The remnants of this coolant can often be seen around the upper tank of an engine’s radiator.

In certain situations, a failed thermostat can cause an engine to make a number of odd noises. This most prominently includes a “gurgling” noise, which occurs as coolant attempts to flow through a partially closed thermostat, or escapes from a radiator’s cap.

You might also notice a reduction in fuel economy if your engine’s thermostat has failed in the open position. This stems from the fact that an engine in this condition will run cooler than normal, often leading to a relative loss in combustion efficiency.

What Causes a Thermostat to Go Bad?

In the bulk of cases, a thermostat simply fails from normal wear and tear. Though hearty by design, a thermostat’s internal spring is only capable of withstanding so many operating cycles, before succumbing to failure. This, in turn, necessitates replacement.

A thermostat can also fail if two different types of coolant have been improperly mixed. When non-complying coolants are mixed together, thick sludge is often produced. This sludge can easily gum up a thermostat, preventing proper operation.

Stuck Open vs Stuck Closed (Which is Worse?)

It is much worse for an engine’s thermostat to stick closed, versus open. This is due to the fact that a thermostat stuck in the closed position will impede the flow of coolant between an engine’s block and the radiator. This, in turn, leads to rapid overheating.

A thermostat that is stuck open has the opposite effect. When a thermostat is held in the open position, coolant is allowed to flow between an engine’s block and radiator at all times, preventing an engine from reaching operating temperature in a timely manner.

This often leads to excessive emissions output and less than efficient combustion.

How Long Do Car Thermostats Last? 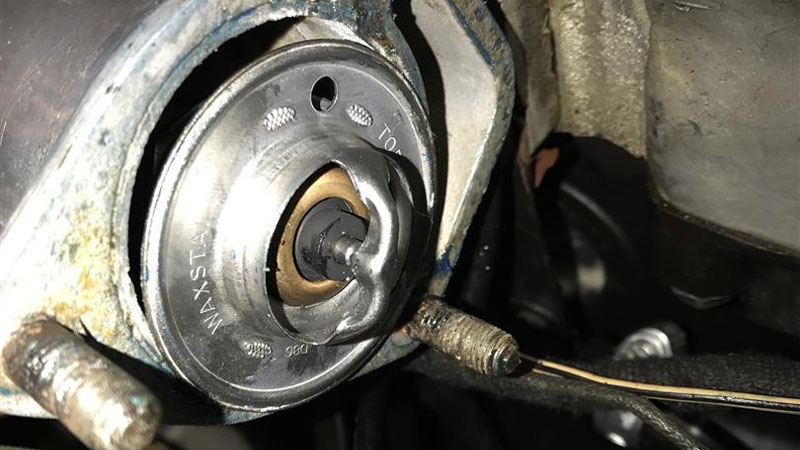 A thermostat seldom lasts for the life of an engine. Quite the contrary, one can expect to replace their vehicle’s thermostat every 8-10 years on average.

However, while quite rare, it is not unheard of for a thermostat to last considerably longer than this, under ideal circumstances.

Can You Still Drive With a Faulty Thermostat?

Whether or not you can actually drive with a faulty thermostat largely depends upon the manner in which the compromised thermostat has failed. If a thermostat has failed to the “closed” position, overheating is imminent. A vehicle should never be driven in this state, as severe engine damage can quickly result.

On the other end of the spectrum, is a stuck “open” thermostat, which allows coolant to flow continuously to and from a vehicle’s radiator. This often makes it difficult for an engine to reach full operating temperature. While a vehicle can be driven in this fashion, doing so for prolonged periods is not advised.

In any event, a faulty thermostat should be replaced as soon as possible. Doing so prevents the undue risk of additional engine damage, and restores engine operation to peak efficiency. If you do not feel comfortable tackling such repairs yourself, make an appointment with a trusted automotive service center as soon as possible. 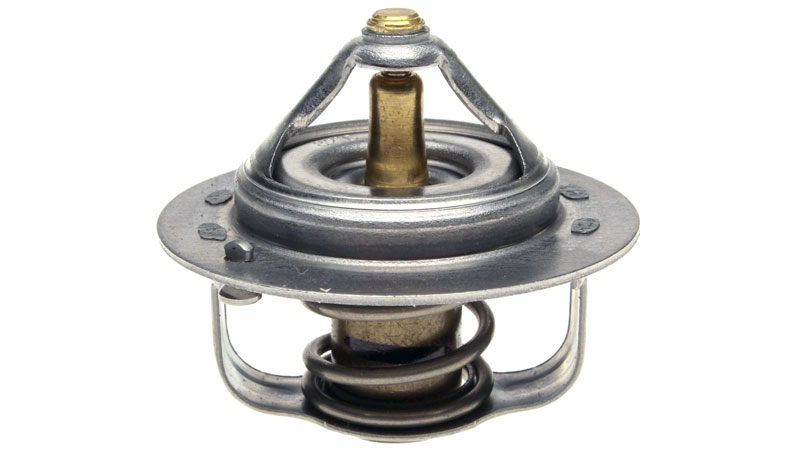 The cost associated with thermostat replacement often varies by vehicle, with some replacement costs far exceeding others. This stems from a number of variables, including the time it takes to complete such a repair, as well as the cost of the thermostat itself.

Generally speaking, one can expect to pay somewhere within the range of $150-$350 to have their engine’s thermostat replaced. Again, the single biggest variable related to cost in this case is the number of labor hours billed, as well as an individual shop’s billed hourly rate.

The actual thermostat and accompanied gasket may run you as little as $15 to over $100 for some. It really depends on the vehicle and whether the part is OEM or aftermarket.

Automotive thermostats are not universal, as they often vary in size and temperature presets. Manufacturers select the specific thermostat that best meets their needs, in terms of actuation temperature.

An engine’s thermostat opens at, or near the temperature that provides the most efficient operation, as well as the lowest emissions output.

For this reason, it is important to carefully select any replacement thermostat, ensuring that it is a direct OEM fit. Anything to the contrary can cause a number of operational issues, that range in severity.

Does a Car Thermostat Affect A/C?

A faulty thermostat should not interfere with a vehicle’s A/C function. However, you might notice your vehicle’s heat is not operating as intended. This is generally the case when an engine’s thermostat is stuck in the open position.

When stuck in the open position, coolant is allowed to circulate freely between an engine’s block and radiator. This delays engine warm-up, thereby reducing the thermal efficiency of a vehicle’s heater core.

Without proper flow of warm coolant to the heater core, heating efficiency will be drastically reduced.

Steve is a former ASE Certified Technician and holds a degree in automotive service technology from Weber State. When he’s not searching for a 10mm socket in his garage, he enjoys a good BBQ with family and friends.