This is a partially restored BMW Isetta 300, interestingly it’s one of the rarer “cabriolet” models which came with a folding rear roof section coupled with the standard folding soft top sunroof.

BMW built over 161,000 examples of the Isetta, the small cheap “bubble car” helped the country get back on its feet after WWII when money, fuel, and materials were in short supply.

The Iso Isetta “bubble car” was developed by Italian engineers Ermenegildo Preti and Pierluigi Raggi under the direction of Iso company owner Renzo Rivolta in the early 1950s. 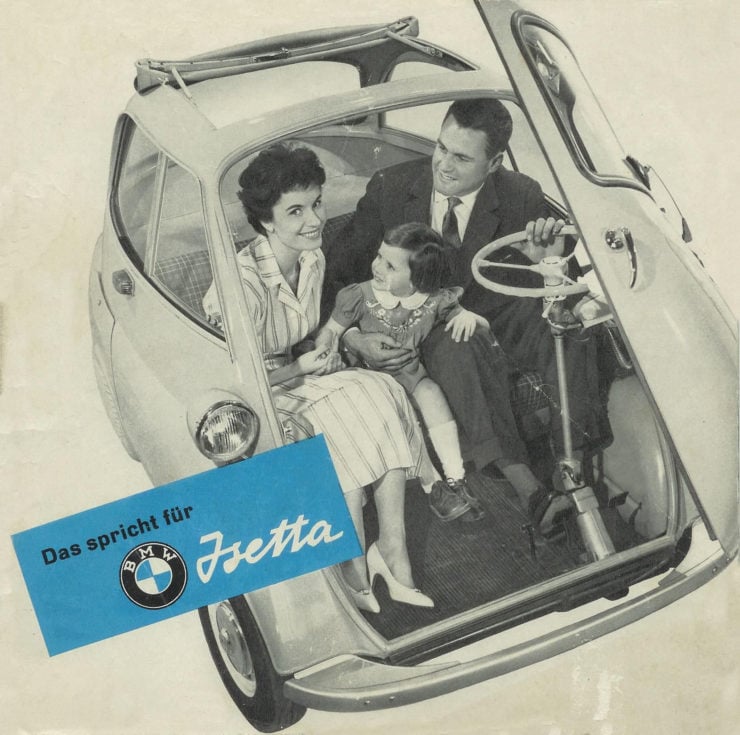 The Isetta has an unusual front-opening door, this necessitated the fitment of a fabric sunroof to allow occupants an escape route if the door is jammed shut in an accident.

With the Second World War having ended just a few years prior in 1945. Italy and much of the rest of Europe was in the grip of crippling economic austerity, and materials like steel, rubber, glass, and gasoline were hard to come by.

This meant that the ideal car would made using as little steel, rubber, and glass as feasible, and that it would consume as little gasoline as possible. These shortages led to the rise of the bubble car, also known as the micro car.

The design of the Iso Isetta used a simple steel chassis with a stamped steel body, a 236cc 9.5 hp two-stroke engine, a 4-speed transmission, and it offered seating for two with a small amount of groceries or cargo. For those who needed a car to get to work in urban environments like towns and cities the Isetta made a lot of sense.

The concept proved popular in Italy and it attracted attention from around the world. Before long the little Isetta was being produced en masse in factories in France, Spain, Argentina, Brazil, and in Germany where it was produced by BMW. 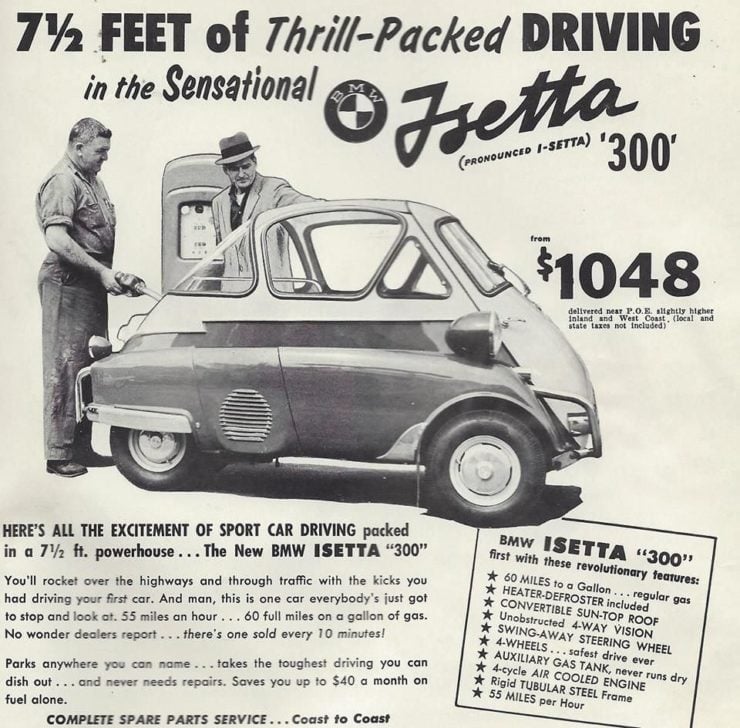 Period advertisements for the Isetta were perhaps a little optimistic given the 13 bhp engine and 53 mph top speed.

With the release of the Fiat 500 in Italy in 1957 sales of the Isetta largely dried up, as the 500 was essentially a full-featured automobile at a similar price point. Sales of the model would continue in Germany until 1962, the car became a cult classic in Europe and today they’re highly sought after.

The Germans truly made the Italian Isetta their own. When BMW bought the tooling and rights for the car in 1955 they largely reengineered it and as a result very few parts are interchangeable between the Italian and German Isettas.

BMW offered two main versions of the Isetta, the 250 and the 300. As is common practice with BMW the model number designations tell you the engine size, in this case in centiliters.

The BMW Isetta 300 was faster and more powerful than its Italian forebear, offering 13 bhp and a top speed of 53 mph (85 km/h). The engine was also a more advanced four-stroke design that offered better fuel economy of up to 78 mpg‑US or 3 L/100 kms.

One of the rarer sub-types of the BMW Isetta is the “cabriolet” version though it wasn’t a true convertible, perhaps more of a targa. The fabric sunroof could also be opened of course, this was also a safety feature in case the front opening door was jammed.

In the cabriolet models the rear window was replaced with a fold down fabric cover, allowing good airflow through the cabin and helping to solve the heat problems that drivers could encounter on hot sunny days due to the open greenhouse design of the cabin.

Above Video: One of the most memorable on-screen appearances of the BMW Isetta was in the classic American sitcom “Family Matters,” in which Steve Urkel learns to drive (or almost learns) in a 1960 model.

The partially restored BMW Isetta 300 Cabriolet you see here is being offered for sale out of Corona, California by an Isetta restoration specialist.

In the listing he explains than the car comes with most of the parts needed to complete the job, and he provides a list of outstanding parts that will still be required.

If you’d like to read more about this unusual German/Italian project car or make him an offer you can visit the listing here. The current Buy It Now price is $13,000 USD. 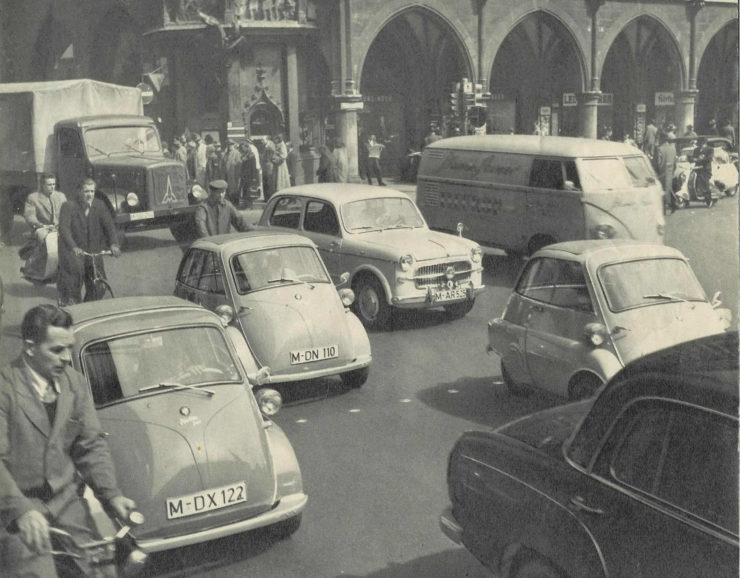 This image from an old BMW Isetta brochure shows Isettas mixing it with other vehicles on German streets back in the 1960s. Over 161,000 Isettas were made by BMW and so they were a common sight in the 1950s.