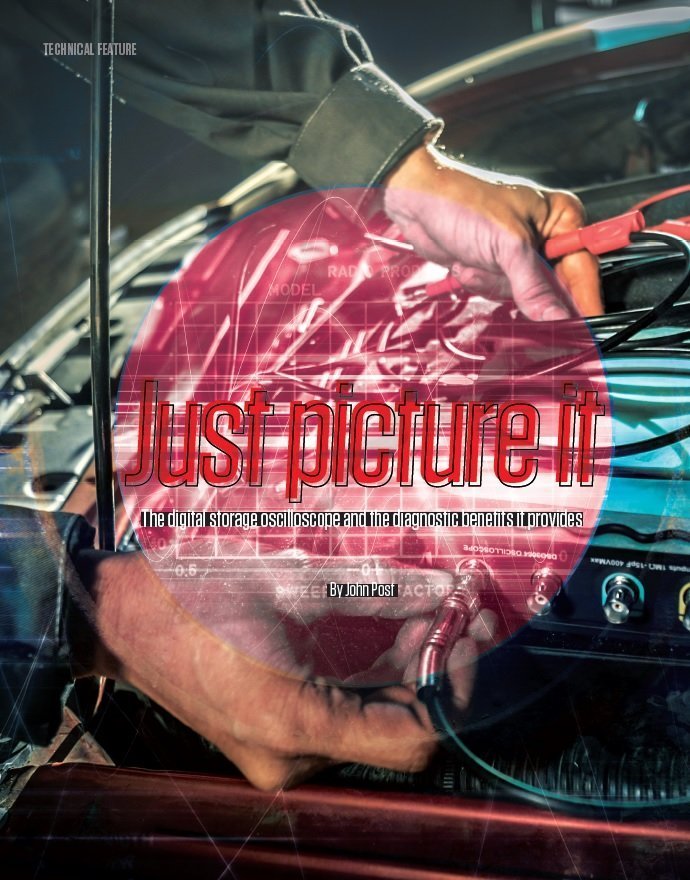 When speaking to fellow technicians about drivability diagnostics, I am always surprised that many have never used a scope.

They rely entirely on traditional testing methods such as test lights, multi-meters, scan tools and mechanical gauges for diagnosis. These tools are staples of the automotive repair industry and no doubt still have their place in the realm of diagnostics. But sometimes they just aren’t enough.

When I bring up the subject of using a scope, I often find it is met with skepticism and an occasional negative comment along lines of set up time is too long, difficult to learn or the scan tool tells them everything they need to know.

Some technicians are unaware of what a scope is and of the diagnostic power this tool provides. Other technicians may have access to a scope but don’t use it consistently. So they struggle with the setup or analysis of the waveform and become frustrated.

Typically, it’s not until a technician encounters a vehicle they can’t diagnose that they realize something is missing from their diagnostic approach. In many cases what’s missing is the ability to see the actual operation of the circuit or component electronically.

The digital storage oscilloscope has been in the automotive repair industry for decades. It’s available in many different forms from handheld units to PC- and Android-based platforms. They are available as single channel, two-channel, four-channel and eight-channel units. There are a variety of brands available to the automotive technician, each varying significantly in price and features. However, they all have one thing in common: They all plot voltage, amperage, or pressure over time.

The ability to display an input signal measured over time allows the user to see intermittent glitches that occur too fast for conventional tools like a multi-meter or even a scan tool in graphing mode to catch. These glitches or dropouts are caught by the engine control module, however, and in many cases can be the cause of a drivability problem.

When combined with accessories such as inductive amperage clamps and pressure transducers, the diagnostic information displayed on the scope screen is unequalled by any other piece of diagnostic equipment to which we have access.

An example of what the oscilloscope will allow us to see is both the mechanical and electrical operation of solenoids. It will display pressure changes in the intake manifold, exhaust system, crankcase, fuel system and cooling system. Valve timing issues can now be quickly diagnosed by analyzing the crankshaft and camshaft signals simultaneously. By installing a pressure transducer into the spark plug hole, the technician is now able to see piston and valve movement in relation to each other through 720 degrees of crankshaft rotation.

The testing capabilities of an oscilloscope are really only limited by the user’s imagination. Any part of the vehicle that is electrical, electronic or produces a pressure can be quickly tested and analyzed using a scope in conjunction with a few other accessories. They can even be used to detect and pinpoint noise issues.

One area where oscilloscopes truly shine is by allowing the technician to perform non-intrusive testing and diagnosis. This is a test performed without removing components, which can be time-consuming and costly to the customer. 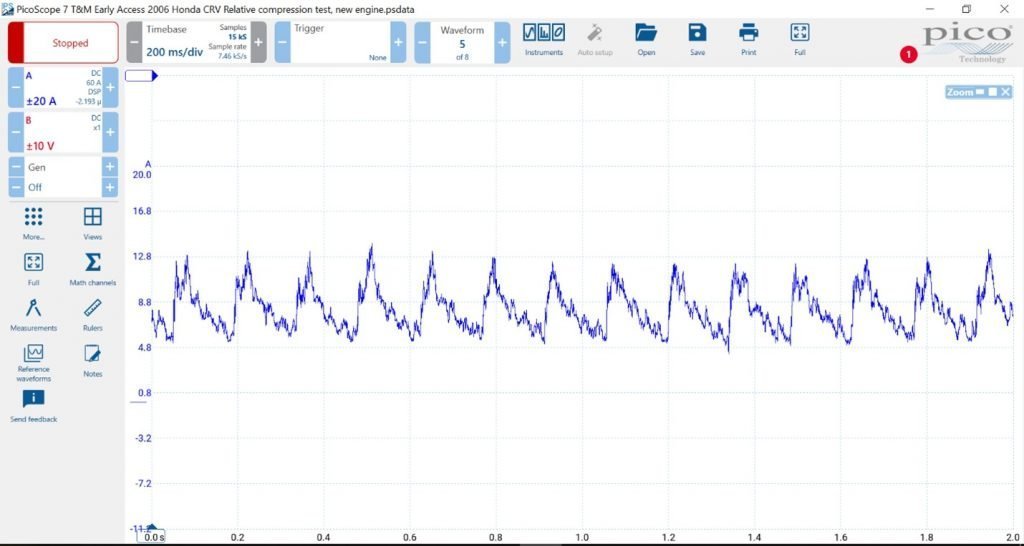 The mechanical condition of the engine can be quickly tested using the oscilloscope and amp clamp. This is one of my favourite non-intrusive tests to perform, especially when diagnosing a misfire. We have all done a starter draw test using a carbon pile tester to measure the amperage draw of a starter motor while cranking the engine. If the same test is performed using an oscilloscope with a high amperage amp clamp around the negative battery cable (Fig. 1), we can observe the amperage required for the starter motor to push each piston to TDC on the compression stroke. 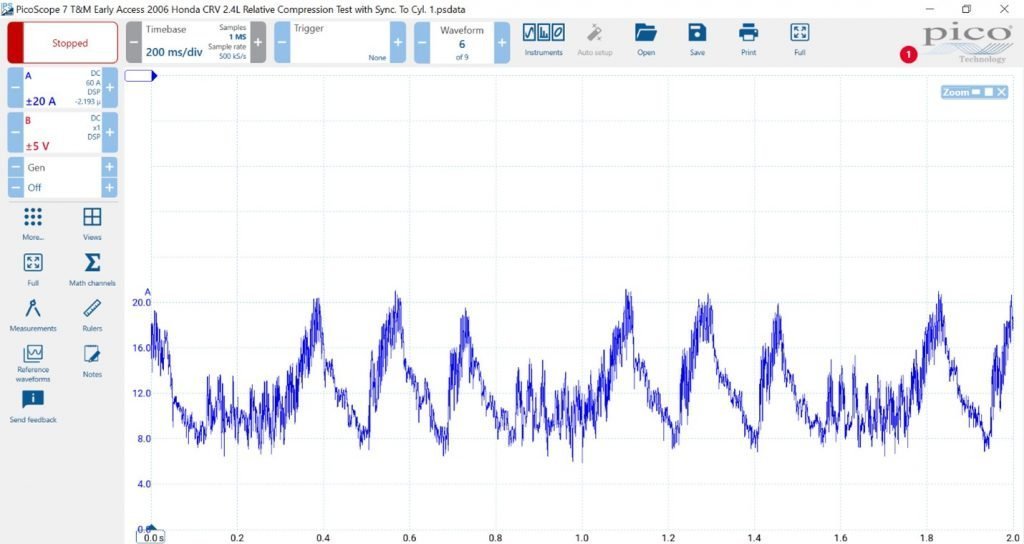 Each amperage peak is then compared to the others to see if they are relatively all the same. For that reason, this is called a relative compression test. If a low amperage peak is observed, a cylinder with low compression is indicated. By adding a synchronization signal on a second channel, (Fig. 4) the cylinder in question can be easily identified when the firing order is also known. 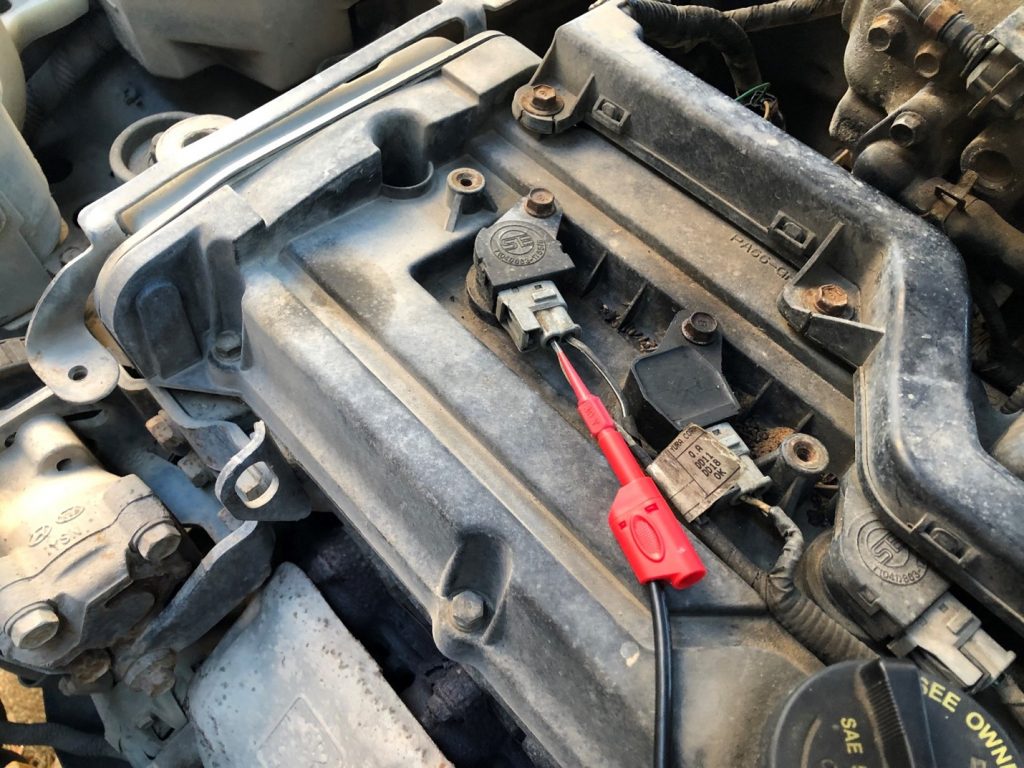 Fig. 2 indicates a healthy engine with relatively equal amperage peaks for each cylinder. Fig, 3 is an engine that had burned exhaust valves in cylinder four, resulting in no compression. Fig. 5 is the waveform with both channels on, allowing identification of the low cylinder. This is a directional type of test that quickly indicates whether the problem is mechanical or not. Further testing using pressure pulse analysis of both the intake manifold and exhaust system was required to find the actual reason for the low cylinder. 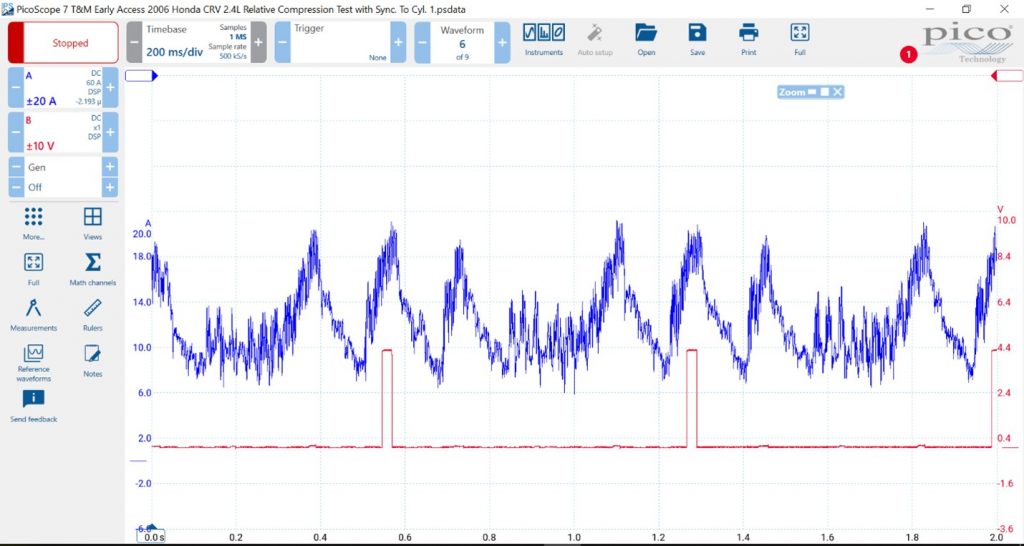 Some will argue that a vacuum gauge will also give the technician an indication of the mechanical fitness of the engine, which I agree with completely. But a vacuum gauge does not have the ability to show us which cylinder has the problem and many new engines do not offer easy vacuum gauge connection points.

This is just a small sample of the type of testing and diagnosis that can be performed using an oscilloscope.

Below, I have listed some of my responses to the most common questions I get asked when the topic of oscilloscope use is discussed:

Do scopes take a long time to set up?

No, not if you get into the practice of setting up your scope first thing in the morning so it’s ready for the day. The key to scope use, just like any other tool, is practice. It is difficult to use the scope and learn how to analyze waveforms while under the pressure of a difficult drive-ability diagnosis. Being unfamiliar with the tool will lead to frustration. It is important to use the scope on a regular basis and test known good vehicles. If you know what a signal is supposed to look like, it will be much easier to diagnose when you see a bad one.

Do scopes slow down diagnosis?

No. Oscilloscopes, when used proficiently, greatly enhance and speed up the diagnostic process. They allow the technician to perform accurate diagnostic testing in just a few minutes that can take hours using traditional testing methods. In the relative compression example above, this test takes less than a minute to perform and can be performed on any engine. Even on an easy-to-access four-cylinder engine, performing a compression test on each cylinder will take substantially more time. How long does it take to perform a compression test on a cylinder that requires intake manifold removal to access? Especially if that is the initial test being used to rule out a mechanical issue.

Are scopes difficult to use?

No. Some are more user-friendly than others, but they all work in basically the same manner. As stated earlier, the key to scope use is practice. If you can set up and use a multi-meter, you can learn how to use an oscilloscope.

Is there a learning curve?

Yes, but no more than the learning curve that exists with other pieces of diagnostic equipment. We all learned how to use a scan tool and multi-meter. We all had to learn how to read and interpret scan tool data and wiring diagrams. Learning how to use an oscilloscope is no different. Once you master using your scope and the interpretation of the waveforms displayed, you will wonder how you were able to properly diagnose and repair vehicles without it.

John Post has been an automotive service technician in the Ontario aftermarket for more than 30 years. He has been teaching electrical, fuel systems and drivability diagnostics at Centennial College since 2015.

This article originally appeared in the March/April issue of CARS.