One of the five men who heroically jumped in to save a man from a burning vehicle on an Ontario highway said the rescue happened “literally the nick of time” before the car exploded in flames.

Ben Sykes told CTV News Toronto that he and his wife were driving on the Queen Elizabeth Highway (QEW) in Mississauga on Monday when they saw a moving vehicle on fire that eventually crashed into a ditch near the Cawthra off-ramp.

“I saw somebody with a car jack in their hand, heading towards the vehicle quickly and then started to hit the window. And so I guess at that minute, I sort of felt like ‘Well, I got to help here.’ And so I jumped out of the car and, you know, just did what I could to try and help at the moment,” he said Thursday afternoon.

A video of the incident, tweeted by the OPP Wednesday evening, shows smoke billowing from the stopped vehicle as five men attempted to rescue the driver.

The OPP says the driver, a 36-year-old man from Toronto, experienced a medical episode during the incident.

The five men then jumped into action to help free the unconscious man from the rapidly burning vehicle.

Sykes, who was wearing a white shirt in the video, is seen kicking and elbowing the car window to try and free the man. 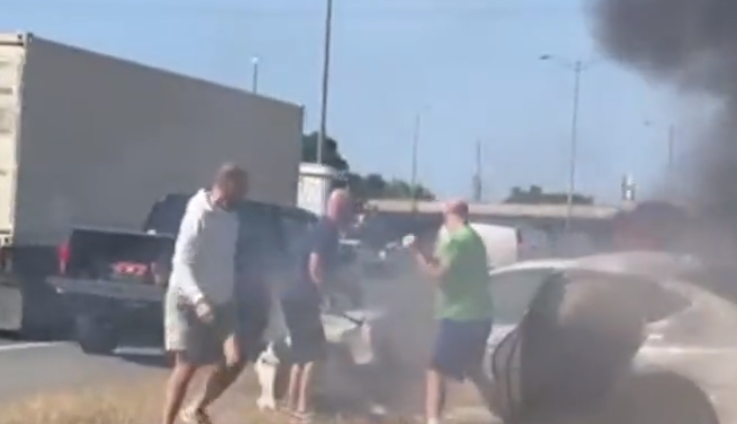 Ben Sykes is seen in the white shirt. (Supplied)

“Thankfully there was a guy in a dump truck, whoever that was, he threw a hammer out the window and I realized, okay, we gotta grab this thing,” Sykes said.

“And so I grabbed the hammer and smashed that window and we were able to get it open and just thankful that the timing worked out the way it did, it was literally the nick of time.”

The men then pulled the driver out of the vehicle to safety.

Sykes says the rescue happened in a span of about 30 seconds, before the vehicle burst into flames.

The OPP says the driver sustained no injuries and is alive today because of the men’s “heroic efforts.”

Ben Sykes, left, and Fabricio Lauar Banon, right, were both involved in the rescue on Monday. (CTV News Toronto)

Sykes says he spoke to the driver yesterday.

“He obviously is thankful. I’m sure it’s all setting in for him. It’s emotional. It’s been an emotional roller coaster for me this week. I’m sure it’s been the same thing for him. So, thankfully he’s in good shape, and we all walked away,” he said.

Sykes added that he went into “fight or flight” mode and just wanted to help a person in need.

“I think there’s a lot of people out there that would do the same thing if they got into that situation. And all we can do is try and help other people and the world’s a good place despite all the stuff that’s going on right now.”