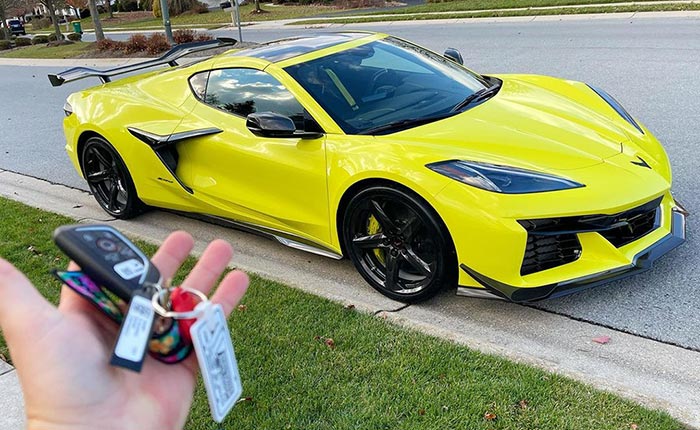 Demand for the 2023 Corvette Z06 is so high that people are willing to hand over huge sums of cash to get one. We watched last week as the Stradman turned down $110K over MSRP ($283K) to sell his after only two days of ownership with his car. We now have our first example of a Corvette Z06 changing hands, and the new owner will still get the warranty.

Of course, this interesting situation features YouTubers as the main players. TJ Hunt had custom ordered VIN #030, an Accelerate Yellow Coupe with all the options that totaled $173K and would have cost him $191K to bring it home. He explains in this video posted early Sunday evening that he was focused on another vehicle project for his channel and both the timing and costs caused him to reconsider. TJ called Whitmoyer Chevrolet’s Matt Beaver and explained that he had to give up his allocation.

“I literally thought it was a prank,” said Matt “And then he kept going on and on, and I realized he’s for real.”

Matt has sold multiple Corvettes to Mike Hyssong aka StreetSpeed 717 over the years, and Mike was actually first on Matt’s Z06 list to get an allocation but was passed over by VIP buyers TJ Hunt, the Stradman, and Emelia Hartford. Once TJ backed out of the deal, Matt made the call to StreetSpeed, asking him if he was “ready to buy a Z06?”

Because TJ never got to the paperwork stage, Mike officially becomes the car’s first owner, thereby avoiding the loss of the warranty, which is what happens if the original owner flips the car within six months. Plus, he’ll be eligible for the 500K My Chevy Rewards points valued at $5,000 if he keeps the car six months. However, one fun aspect is that TJ’s name still appears on the car’s interior plaque.

The car was sold at MSRP $173K plus taxes, title, and tags that totaled $200,000 out the door. Mike had to trade in his truck just to free up some cash as the deal came about unexpectedly. Here’s the video as Mike takes delivery of TJ Hunt’s Z06:

You can see TJ Hunt’s video here explaining why he gave up the allocation for the car. By walking away from the deal instead of flipping it, TJ remains on GM’s good side and can possibly gain access to other limited vehicles from the company as a VIP buyer.

[VIDEO] The Stradman Takes Delivery of his Yellow 2023 Corvette Z06